How to prevent a flat tyre on electric scooter 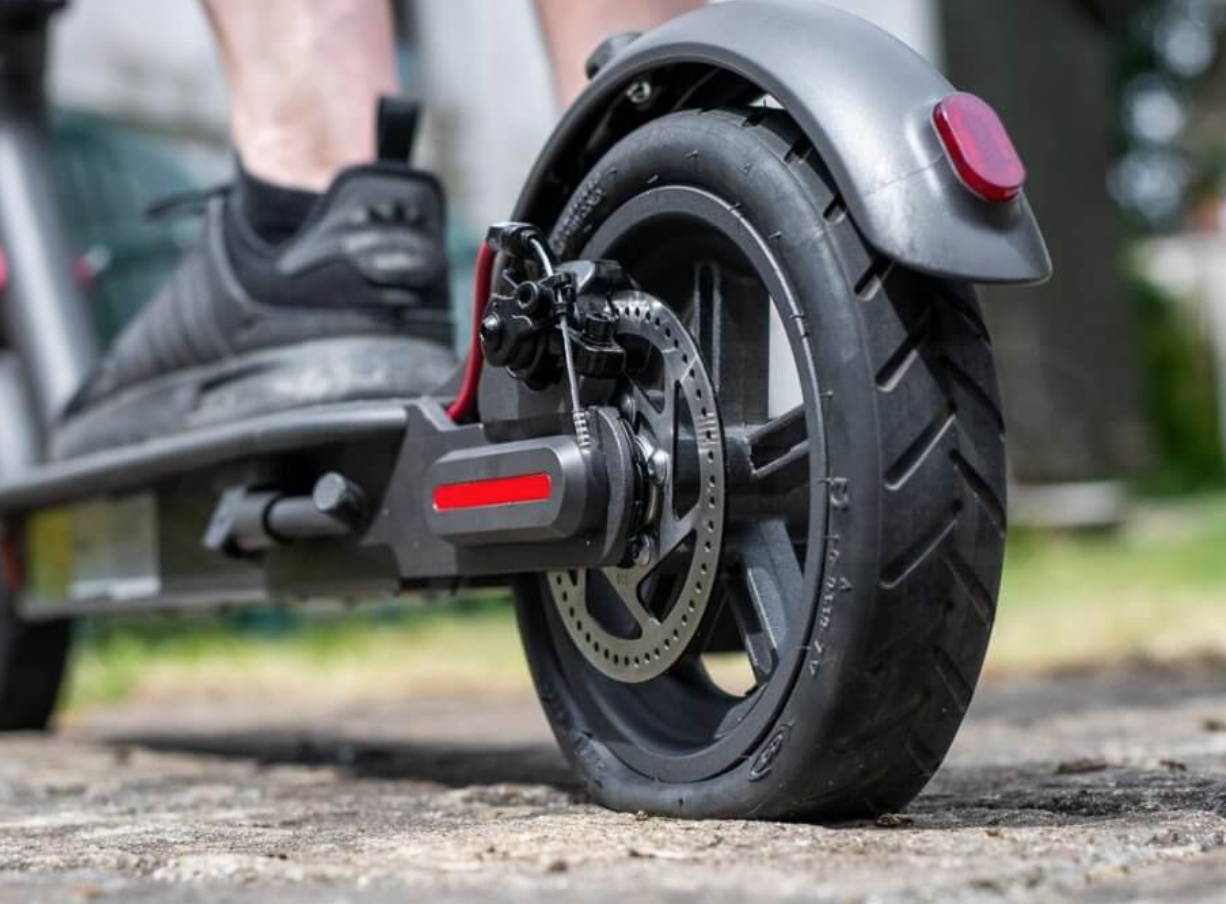 HOW TO PREVENT A FLAT TYRE ON YOUR ELECTRIC SCOOTER

The most common and infuriating problem that electric scooter owners face is flat tyres; repairing them can be a real pain, especially when you’re far from home. It turns out that with a little effort and preparation, flat tyres can be significantly reduced.

Continue reading to learn some easy and inexpensive ways to keep your electric scooter from running a flat tyre. 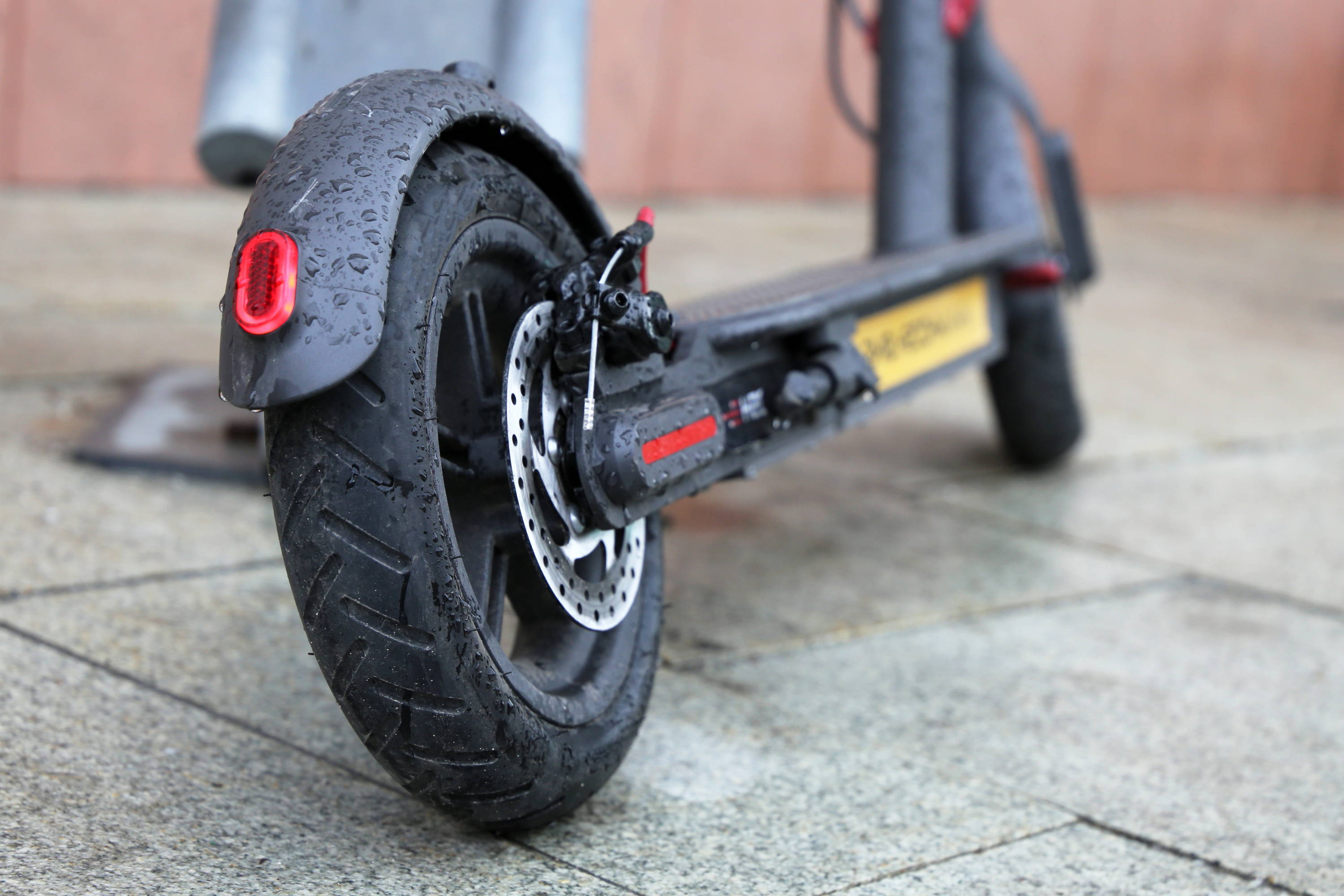 Rain – It happens, and it certainly does so in the UK. Your e-scooter is going to get wet unless you never leave the garage. Even if you're very fortunate and never have to deal with a storm or a passing drizzle; avoiding puddles, splashes, and sprays will be difficult at times.

So, how does this affect your e-scooter, especially the “e” part? Let's take a look at how your e-scooter handles water and when you should be concerned about how it could affect its performance.

It may be helpful to describe some of the words we'll be using first. The term "waterproof" is a high standard that is usually associated with clothing rather than hardware. It usually involves the use of a membrane that prevents water molecules from passing through while allowing air to pass through.

The applicable norm is water resistance. The key distinction is how well an object handles sustained and full immersion in water. Waterproof means that anything will work properly when submerged or after being immersed in water. It is water-resistant if it can work normally in virtually all wet conditions except when fully submerged.

How to know your scooters waterproof rating?

The international standard protocol also known as IP is a globally recognised standard. It's commonly used to decide whether or not a scooter is waterproof.

IP scores are two-digit numbers such as "IP 54" or "IP 67." They tell you how well an electrical system is safe against foreign objects and moisture.

The first digit of the IP rating indicates the degree of protection from solid foreign bodies, and it’s not of much use for water resistance.

The second digit is what we're looking for. It demonstrates how well components are guarded against different levels of moisture. Anything above 3 already indicates that the unit is water-resistant. A value of 4 is already very decent and sufficient for dealing with rainy weather, whereas 5 and anything higher is effectively waterproof.

The numbers in the second digit represent the following:

Also, bear in mind that storing any e-scooter in damp, humid conditions for an extended period is likely to affect its operation, particularly that of the battery. Avoid leaving your e-scooter in such conditions and always give it sufficient time to dry out before the next use.

Keep a cloth handy to wipe down your scooter after exposure to rain and moisture, go around lakes instead of through them and you’ll get years of high performance out of your e-scooter. 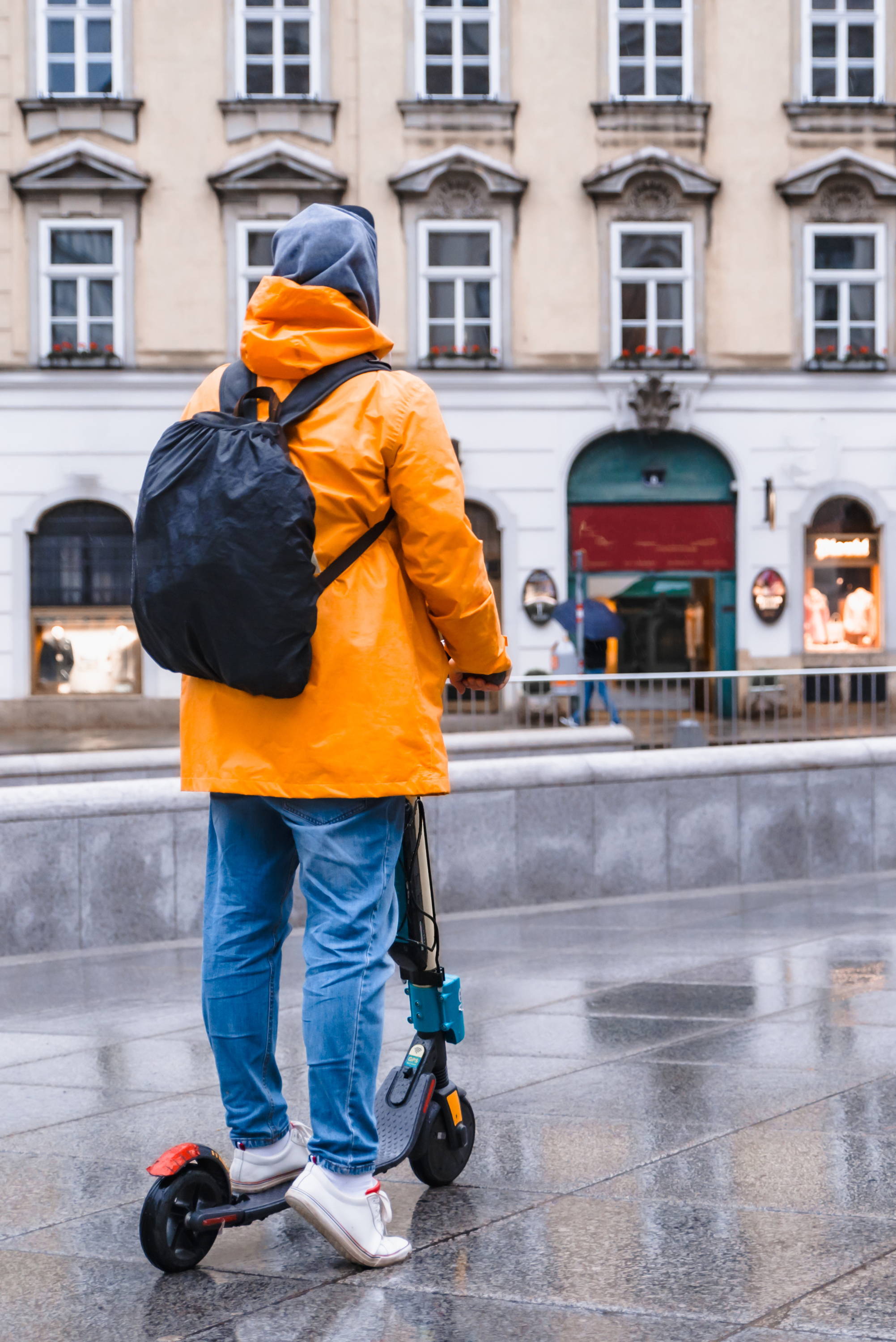 How to Waterproof your Electric Scooter

Your electric scooter can be waterproofed in a variety of ways. The connectors must first be protected. You'll need to use dielectric grease for this. It aids in the isolation of the connectors from moisture and air. It also acts as an anti-oxidant.

After that, use the liquid tape to professionally separate all components except the LED indicators. It's best if you use battery bags and potting components that have been coated with waterproofing spray. We suggest using a hot glue gun for this task.

If all else fails, we suggest beginning your journey with an e-scooter that has been manufactured with water resistance or waterproofing in mind, it’ll save you time and money and not to mention disappointment if your DIY waterproofing doesn’t stand up to the rain.

Visit https://sxcscooters.com/ for a range of Waterproof and Water-resistant E-scooters

In this post, we'll show you how to properly manage your favourite compact e-scooter, and, of course, how to have a good time while doing so.

E-scooters, unlike manual scooters, require a certain level of maintenance. While they are theoretically low maintenance, doing so regularly will help keep them safe to drive and running smoothly.

Furthermore, a well-maintained e-scooter allows you to rely on it whenever and wherever you want.

You must know how to care for your e-scooter if you want it to last for years! Here are a few main tasks to keep in mind.

Make sure the battery is charged frequently. Without a battery, an electric scooter isn't what it is. With the batteries removed, it can still be used as a manual scooter, but the convenience of pain-free travel is lost.

Lithium-ion batteries are used in e-scooters. These advancements, unlike previous lead-acid batteries, can provide improved functionality and longer-lasting capacity. This form of battery, on the other hand, has a life cycle. To ensure that your battery lasts as long as possible, make sure to charge it to 100% every few days or after each ride. 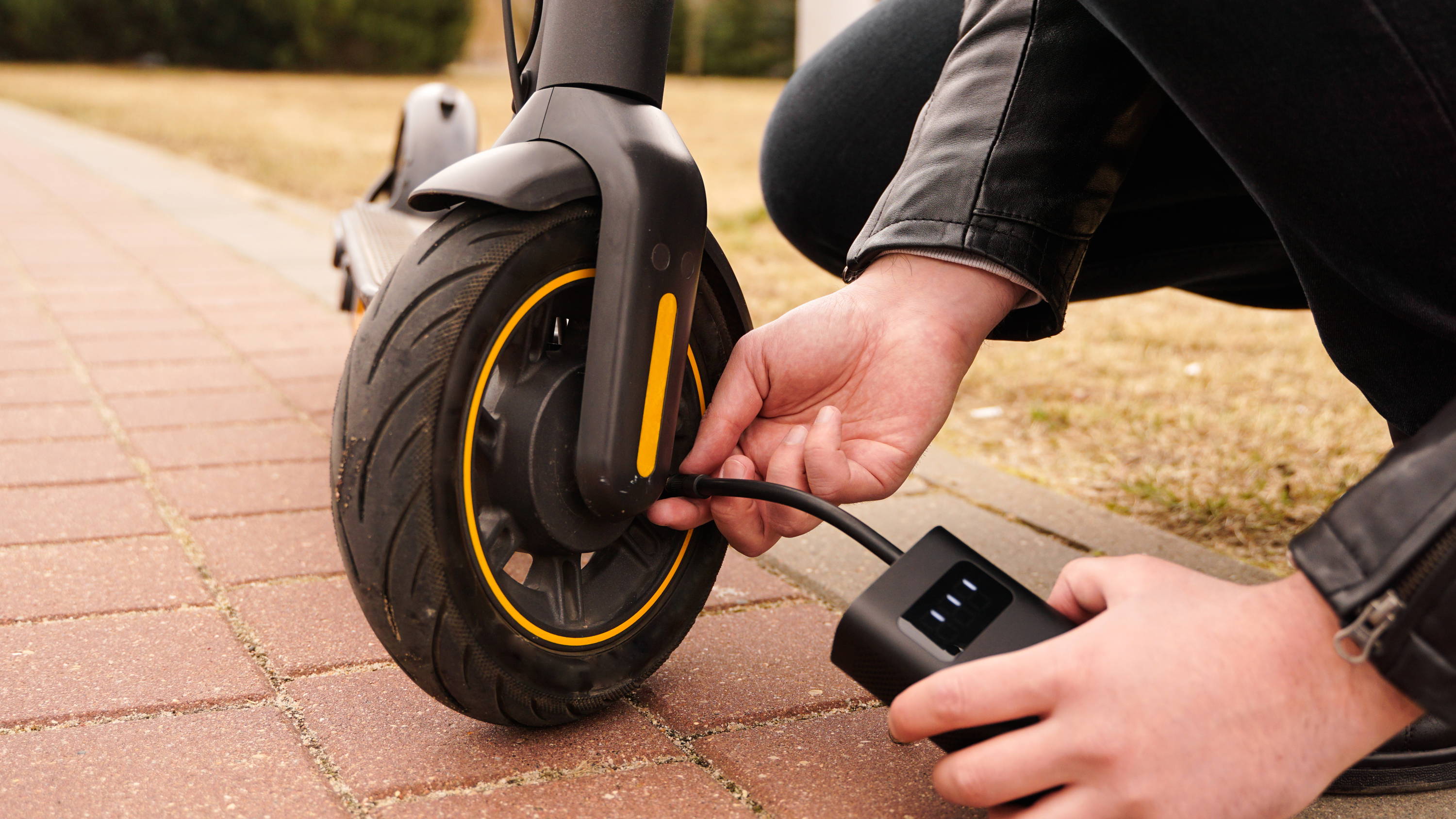 Before you ride, make sure your tyres are properly inflated. Proper tyre inflation will allow you to travel the full distance without overtaxing the scooter's e-motor. This can be done with a basic bike tyre gauge.

You should also inspect your tyres for damage regularly. This will tell you whether they need to be replaced. To prevent excessive wear on the inner tube, they should also be held at the proper pressure.

Always ride with a patch kit or tyre repair sealant on you! This way, minor tyre problems could be addressed without disrupting your commute.

The braking mechanism on an electric scooter is regulated by a series of wires and cables. The brakes work properly when the cables are in good shape. Brakes that are rusty, rusted, or weakened, on the other hand, will not perform as well as they can. In the worst-case situation, they will not work at all.

This is why you can check your cables regularly. Make sure the cables' plastic casings aren't broken. When testing the brakes, the same is true for the throttle cord.

Do not attempt to repair any significant damage to the cables, housing, or brakes yourself if you find any! This type of scenario is better handled by an e-scooter repair specialist.

Avoid riding in rainy weather or on muddy surfaces. While an e-scooter can withstand water exposure, it is not recommended to ride through it regularly. Water makes it impossible for the scooter's tyres to support it. It can rust the metal if it becomes stuck within the joints.

If you must ride in such conditions, make sure your scooter is fully dry before starting your trip.

If you have to ride on wet or muddy surfaces, keep it at a low speed. Keep an eye out for any signs of metal corrosion and clean it up with rust and corrosion protection if necessary.

Knowing how to properly maintain and operate your electric scooter will not only ensure that you get the best results out of it, but it will also keep you safe wherever and whenever you ride it.

It also helps if you buy your e-scooter from an electric shop like Sxcscooters, because you know you're getting the highest quality electric scooters and the best service possible.

Have a repair which you need help with. We have your back. Exclusively for Scoot City Ltd Customers only. © 2019 Sxcscooters is the trading name of Scoot City Ltd.

Disclaimer - Electric Scooters are not to be used on footpaths, cycle lanes or roads in the UK.  It is the complete responsibility of the customer to ensure that you operate your e-scooter within all country and local laws.  The customer assumes all liability and risk associated with the use of electric scooter products and holds Scoot City Ltd and owners free from any liability caused by their use. Add to Wishlist
0
Product has been added to your wishlist
You can view your wishlist by creating account or logging-in an existing account.
Please create account/login through {{ customer_email }} email
Login Register
0